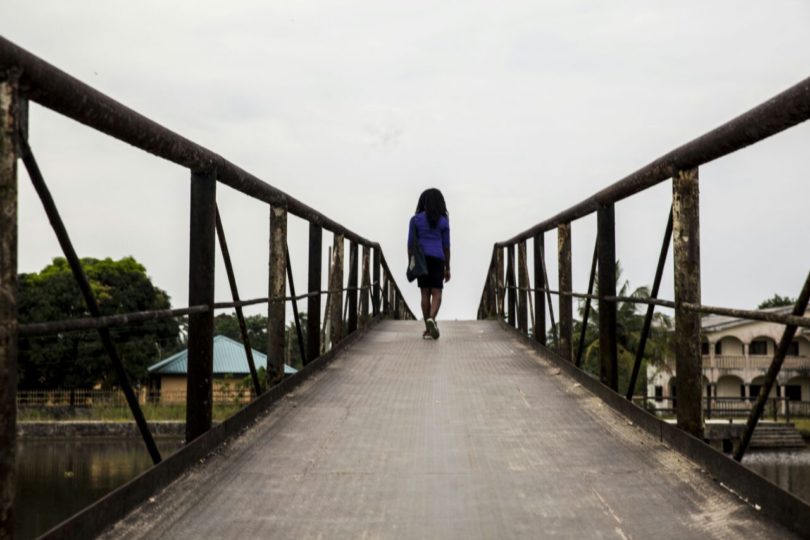 Sometimes the road stretches ahead, long, wide and straight. Other times it has bends, only revealing the part of itself directly ahead, such that, having navigated the bends, one is soon confronted with the unexpected.

The first day of the road trip, we were on our way to Ikoyi to sort out a few things before heading to Ibadan, our first stop. At the start of the Third Mainland Bridge, the part with dry land before one becomes surrounded by waters, I saw through the window, two men standing in the distance. The one behind had his arms wrapped around the man in front. They were jumping and laughing with such excitement that is uncommon to most men of their age. The image, though unfamiliar, filled me with warmth, and I committed it to memory.

I know nothing of how their friendship began. What I do know is that they were once strangers, who have now found a way to walk together through this road called life.

And this road is long.

I often think of all the kindness we received in places we least expected. I think of some encounters with people I’m unlikely to ever see again. Even though I can barely recall their faces, I know I will carry them and their kind gestures with me for a long time. One of many was at Illela Border, where a line separates Nigeria from the Republic of Niger. A Border official, from whom our only expectation on that blazing hot day was to listen to our purpose of visiting, had offered us cold drinks and water.

In the past few weeks, we have entered spaces the occupants did not see us coming into. We left as suddenly as we had arrived. In considering spaces, I think of how people fully allow themselves into other people’s lives, how they come in and stay. I say this because of how the friendship between Austin and Sonny, our drivers, unfolded right before our eyes. From laughter, to teases, to conversations, to arguments, to holding of hands, we watched, grateful to be witnesses.

The first time I saw both of them in the same space was the day before the road trip began. Sonny sat in the driver seat, Austin stood discussing with him by the window. I sometimes return to that moment for what it holds: inception. I have often imagined them, years to come, sitting at a table in a bar, recounting moments that led them there. I imagine one in the other’s living room, giving life lessons to his grandchildren.

The van came to a halt in Lagos, and everyone alighted. We knew it was the last time we’d all be in the same space at a time. After several weeks of constantly being in each other’s faces, we were leaving now. Austin lives in Lagos; Sonny in Benin. It was the way Nengi and I walked up to both of them, jokingly telling them to please, for the sake of the team, keep in touch, refusing to accept that this thing we had witnessed between them both was just going to come to an end. It was the way I looked around into all these faces that were once strange. We had our final work review, grateful for how much we had learnt. But of course, in considering growth as a journey, it’s still a long road, friends.