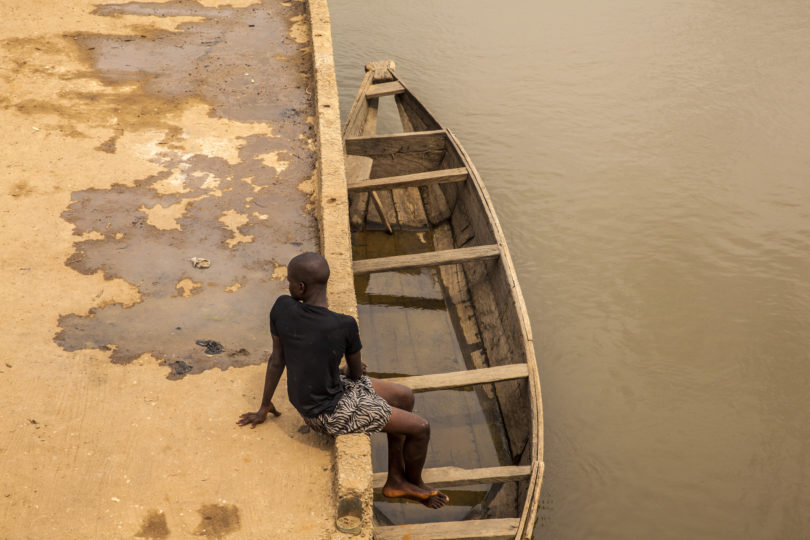 You sit, silent. Look out the window, watch the sparse trees and thick brown grasses run in the opposite direction.  You point at sights to the person sitting beside you. You do not want her to miss anything. So you poke her whenever she wants to sleep. She says she will never sit with you again. That you do not let her rest or read her book. You threaten to sing if she doesn’t pay attention. You win, bad things happen when you sing, so to avoid bad things happening she pays attention.

You continue looking outside. Your mind is traveling faster than your body is traveling. The conversations of other bodies in the van are interrupted by sleep.

You say you don’t always want to take pictures, sometimes all you do is flood your mind with the images your eyes capture even though you can’t remember them all. She says you’ve said something profound. She writes it down, that’s what she always does, write things down.

“I have seen this before,” I told Yinka as we drove into Sokoto. “I was on a road trip, visiting the North for the first time.”

Yinka said it might be my subconscious, and that I had anticipated the road trip for too long. One of my co-traveler added another explanation I can’t remember now. But I can remember how strong that false memory felt.

I have been having them quite frequently. I walk into a space for the first time and it’s familiar. I always want to head out, linger, but Innocent leaves no one behind, all his Soldiers of Fortune must enter the van before he does. I still find ways to linger and walk the footpaths my feet recognize. I return smiles from strange faces. I clasp hands and snap fingers I will never feel again.

“We are travelers. This is my first time here…” I lose count of the times I have repeated this. Every new city feels old. In the face of a new stranger, I see the face of a stranger that became a friend.

“Maybe we will meet again.”

“Yes, we will see later in life,” I replied. I still see her smile on random faces in cities she has probably never been to.

I woke up in a traffic jam before Yenagoa. The last memory I had was discussing our altercation with some police officers at a checkpoint in Rivers State. We were talking about the high frequency of security checkpoints in certain regions across the road we’ve traveled and how the security agencies threated us when sleep came.

“You’ve been different since we entered Bayelsa, are you okay?” Nengi asked me.

I admitted I wasn’t sure. The feeling I have is familiar but strange. I couldn’t put a name on it. Maybe it’s being close to home but still far away or maybe it’s the opportunity to see family and friends I haven’t seen in ages. She said I might be nostalgic, she is too. She struggles to remember what Yenagoa was like when she was last there.

The road to Nembe from Yenagoa was longer and worse than we expected. It wasn’t constructed when Google mapped the area so we had to trust the kindness of strangers for directions.

But does a place cease to exist if it is not mapped?

As I walk through the narrow streets of Nembe City, I notice details, I listen more, re-walk paths, exchange greetings with people who somehow know I am a stranger before I speak.

I learn another side of a history I already know. I feel a discomforting ease, “nothing bad can happen here, this is home,” I say to myself. I can only understand bits of what is said in Nembe because although the dialect is similar it is distant from mine, but the faces I see are the same faces I see whenever I’m home.

“Are you okay?” Kemi asked me as we took another walk around the city. I say I am even though I am not sure. The un-named feeling has remained. Strange yet familiar.

As we hopped into the van after an Intervention at Oloibiri, Innocent answered the question behind his shirt and mine, “Where is the future in Nostalgia?” He cannot remember what he said when I asked him later. I cannot remember too. Nobody else remembers. Perhaps this is how nobody remembers Oloibiri despite its place in making Nigeria what it is today.

I see another hawk swerve into the road and then rise above our van. Is it scouting for a prey? Ready to pounce? Is this a metaphor for the question of oil in Nigeria? Foreign and legalized local birds of prey, scouting, ready to pounce?

I tried harder to remember what Innocent said, I had noted it down in my head when he said it, but like all the memories I can’t remember, this one eludes me.