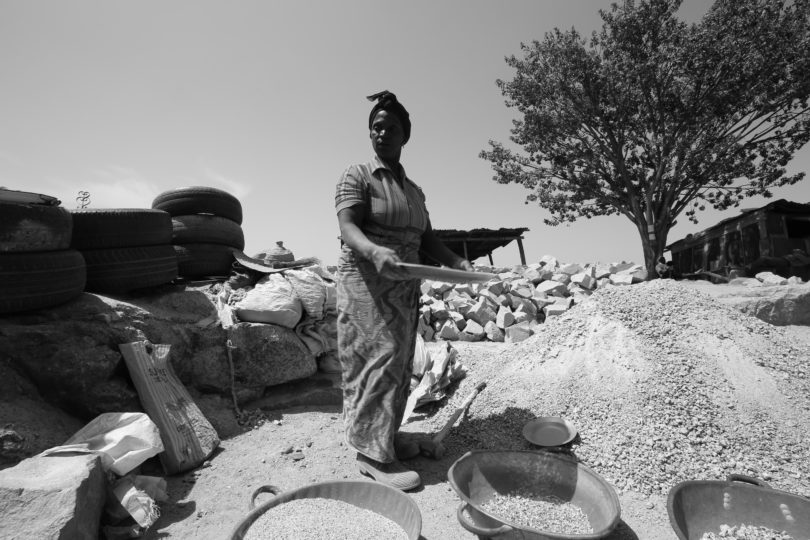 A photograph holds a moment as a record of history that will resonate through time, but what does the witness carry after bearing witness?

In a market in Bauchi, Nengi asks a man to look into her camera. He begins to focus his eyes but his gaze falters. I watch him try again and again. And then, finally, he resolves to look at some point beyond the frame where the world continues to unfold. When Nengi is done, he adjusts a carton he has folded into a square pallet, places this against the buckets of seeds that are behind him and reclines into it.

In witnessing, I have been thinking about what Berger meant when he said the human eye can only be in one place at a time, it takes its visible world with it as it walks.

Miles away from Latyi du in Jos, we find a family of tin miners; some men, two women. It is early evening. The sun still high. One of the men is washing the tin the women have collected in a mud pit. Another, worried about what we are here for, tells us he is not afraid of us. God is with us, he says. And then, unprompted, begins to tell us the story of when the white man brought Christianity to them. He points to the houses beyond the pits towards the mountains, and tells us that once, missionaries (colonials) settled there. But, this is what stays with me: the woman who brings out a cellophane of sugar as he speaks. She unwraps it, throws some of it into her mouth, ties it back and waits for the man to be done with his story.

I have tried to deconstruct the world into smaller frames as a way to preserve something of it in me. I have wondered how possible it is to remake the world in this way.

There is a rock breaking district in Jos where women break rocks for cheap to make a living. The women we meet there on that Saturday afternoon have been breaking rocks for hours. They are tired, chatting as they sift small rocks through perforated trays. The bushes and mountains around them have disappeared, they tell us, replaced by fenced-in bungalows. Now they have to buy the rocks, overpriced, from dealers. In the time that the world around them has been changing, their bodies have grown accustomed to breaking rocks.

I am not sure why I walk into Niger Avenue or wander into the second bookshop I find there. It reminds me of nowhere, but inside, the shop owner is talking on the phone and I hear him tell a woman on the other end of the phone, I think of you 24 hrs every day and I hear in those words an echo that carries into his next question am I not a man? I follow their conversation as it meanders through years I know nothing about and I come to assume things about them. I decide that they are lovers separated by circumstances unknowable to me and that this phone call is a moment stolen from the realities that await them after the phone call. When he is done with the call, he shows me a scar on his neck. In 2012, a group of Muslim teenagers attacked him at the market in Terminus where he had gone to pick a consignment of secondhand novels from Lagos. When I ask him why he has remained in Jos, he tells me about the novel he is writing and then he says, if I run away from Jos, who will write about it?

Bodies moving on from witnessing

Once, when the bus is speeding past a church between two towns, he awakens with a start and begins to rearrange the bags on his end of the seat. I watch his attempt at reordering the world around him. When he is done, he turns to me and says, the bags were falling. Moments later, when he falls asleep again, he lets go of the bags he has clasped to himself.