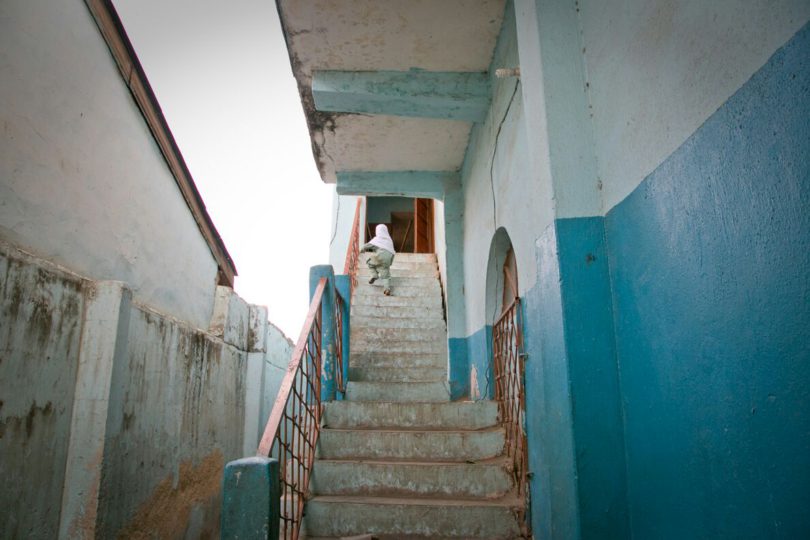 Even before the van stops and we step out, I know I will not like it here. It is noisy and smelly and throbbing with testosterone, adrenaline. Boisterous men lead herds of cows, shouting ‘pwo n’uzo, pwo n’uzo.’ We’re at the Aba abattoir.

The men regard us with some suspicion. One wants to know if we are of the ‘new nation’ or of the ‘zoo nation’. Another asks why I’m dressed in all black, has my boyfriend just died.

I don’t like it here. I like it even less when we walk across the express road and down a slope to the slaughter area. Shades of red, black and grey: blood mixes with mud mixes with sweat mixes with rainwater, and above everything is a dark sky.

The men weave through the maze of mud and blood and severed cow heads. Their steps are sure, like they know this ground, know that it can never sink them. These muscular men wielding their knives and attitude, they make me nervous. Some say feel free, some say no photographs, some say do as you like, others say no interviews.

I imagine these men riled up. I imagine knives and hands accustomed to using them. Mud, sweat, flesh, blood.

Movement as a way of putting fear in perspective: Damboa, Baga, Bama, Chibok, for instance. We’re at the 7 Division Garrison in Maiduguri and a soldier says to us: “We escort about 300 vehicles to these places daily. And we escort them back. Farmers, traders, commercial vehicles, etc. When the insurgents see us escorting these people they cannot come out of the bushes to attack them. We want life to return to normal as soon as possible. We cannot fold our arms and allow people lose their freedom to move.”

I think like him for a second and then I understand: how terrifying it must be for the insurgents to imagine people moving unhindered in a territory believed to be under their control; how the insurgents must know that which each vehicle that successfully traverses and returns, they become less mystified.

The question posed to us, always, before the trip had been: why Maiduguri? Why not some other certainly peaceful and fanciful place in the north? But what is it about movement that makes it rebellious, that empowers, that defies, that says: Look, I am not afraid?

The soldier also said: “Are you from Lagos? My family is in Ikorodu. I call them everyday. When you go back please tell them that you saw me. Tell them that I am well, and I hope to see them soon.”

Later, I said to him: “But you call them everyday. What is the difference between that and me delivering your message in person?”

And then he said: “Your eyes have seen my eyes and will see their eyes. That is the difference. When you give them this message, they will know that you have collected it from me, kept it with you, travelled with it, brought it home safely, the moment you hand it over to them. And they will no longer be afraid.”

Fear is the roiling gas in your tummy when you realise that your hotel is being robbed. From your third floor glass doors, you see a figure breaking the glass door of a shop downstairs with the butt of a gun. You realise that the sound you heard seconds ago was indeed a gunshot.

The world has gone silent, except for the robbers’ voices, shouted commands. You hear another gunshot, then the sound of breaking glass as a portion window shatters above your head. Your stomach turns over as you and your roommate make your way into the bathroom and clamber into the tub, hearts pounding, fingers shaking as you type hurried messages to loved ones. ‘Sorry,’ you say, ‘but I’m going to start farting now.’ And you’re there in the bath tub listening for sounds from the hallway and farting and saying Jesus Jesus and farting and typing out messages and farting. We are constantly surrounded by all kinds of fear: fear of the uncertain, fear of the unknown and fear of the outlined. But there is also the fear of the unexpected—which is usually only talked about after the incident has happened because nobody ever sees it coming.

While we’re waiting at the 7 Division Garrison for clearance to be able to photograph freely around the city, a suspected member of Boko Haram is arrested and brought in. First he is made to sit on the floor, his arms tied behind him, a few soldiers surrounding him, asking him questions. Then he is taken away.

Later that evening, I am listening to a man tell us his stories of Maiduguri in a photo studio.

“I am from Jos, but I have lived in Maiduguri for 7 years. When it started, it was simply a set of troublemakers disturbing the state government. And then it grew and grew. There is peace now, but at that time it would never have been possible for you to come visiting like this.” Then he pauses and leans in as if to make us understand that what he is saying is important: “Underline that word never.”

Then I ask him what it was like living in the city at the time.

“It was horrible. People came in the morning to drop their photos to be printed and died before evening when it was ready. I still have many photos uncollected here because their owners are dead. There were days when customers would come in to take photos and we would all end up sleeping over on the floor here because a bomb had gone off in the city.”

Oh, to live under the fear of the impending.

If you want to go far…

If you want to go far, be prepared to go alone. And sometimes let your fears draw the map for where you should go.

A city cannot be imagined into being—it is a consequence of a concerted effort. And so, Maiduguri, in repairing itself will take the shape of its enduring occupants. The city is already coming alive: burnt buildings repaired, security posts fortified, markets reopening, a photo studio cementing memories again.

But there is a fear that binds: the formation of a Civilian Joint Task Force working closely with the army; the distrust in the eyes of the soldiers when they size you up—anyone of the people walking around on the streets could be an informant for Boko Haram; how the soldiers work tirelessly day and night so the lives of their comrades lost will never be in vain; how writers and photographers like me can now make work and say: Maiduguri is for living in, not for dying in. What I see now is a soldier in Maiduguri in the shop we go to eat a snack. He holds up to us, on the little screen of his phone, two images of piled, bloodied, and dead bodies. He says, This na Boko Haram wey we kill. Both images are foregrounded by soldiers who point towards the bodies.

Hours earlier, there is another soldier who warns us about what a camera can do—more powerful, he alleges, than a gun. His gun is slung around his shoulders the exact way Emeka carries his camera. You know what a gun can do to our bodies. And you know, by what we were shown on the screen of a phone, what a camera can do to the mind.

This is an image of mass death I know you occasionally imagine—your body in a pile of carcasses, rounded up and shot, violated in judgment, extinguished by hate. This image is the sum of your fears.

In his dream my friend Chizoba is conscripted into the Army. This is his first day. His unit is under attack, an air raid. There is an ongoing briefing in a tent when the raid begins. He steps out of the tent, and a missile lands next to his feet. The explosion is delayed, surprisingly. He shouts, alerts the others, and runs for cover. After the explosion he is lying on a heap of debris and bodies…

The other soldier in the shop tells us he cannot put a number to those he has killed. Human beings, he says, we kill them like fly!

I could tell you, regarding Maiduguri, regarding the man suspected of being a member of Boko Haram, that captured enemies are dispossessed of their bodies. I confess I have a fascination with what’s done to those bodies: trussed, dragged, shot at, paraded, flogged, slapped, kicked, stripped, laid, struck… Perhaps my fear is the knowledge that being human I have a body in potentia: trussed, dragged, paraded, slapped, kicked…

I say no more to you about fear. I speak instead of a love dispelling all fear. Love, as in a momentary feeling of ease, without despair. I know this love in a bicycle we saw in Maidiguri. I studied it posteriorly, wondering how its handlebars and pedals might be photographed from that angle, in perfect symmetry. After each attempt I showed Emeka my terrible photographs. A difficult subject to picture, he replied. A little boy with a gallon of petrol came to us. He smiled, placed the gallon in a neat plastic basket on the bicycle, and prepared to leave. He’d come from a church a little ride away, he said. A preacher’s son? Had he seen us consider his father’s bicycle? Delighted by what our presence suggested, curious strangers.

The little boy rode away in the outsized bicycle.

My dears, there are moments like that in Maiduguri—in every part of the world where fear binds, brings together, encloses—moments of curiosity and cheer. On and on, on and on.

*This post is a conversation between Yinka Elujoba, Emmanuel Iduma and Uche Okonkwo. With photographs by Zaynab Odunsi & Yinka Elujoba

2 thoughts on “There is a Fear That Binds”