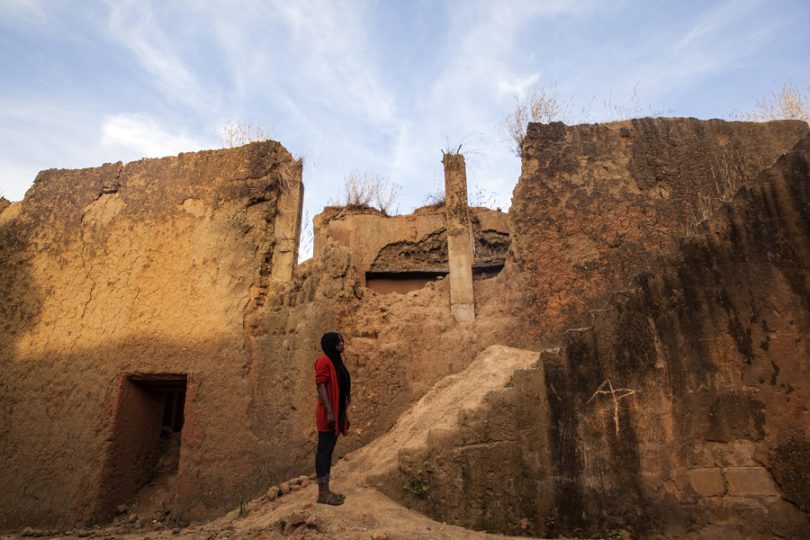 The surface of every story has to be peaceful. I know this now. When I introduce myself to the people I meet on the road, I have to redraw the borders of memory and origin. All the people that I am, folded into one sentence. All the places I have been to, made collapsible. I always want to say more, but there is always too much to say. Like, I come from a place where nothing has stayed the same and everywhere else I go is a place further from this little town along the River Ethiope. Every person I meet takes me further away from everyone who knows the lives I have lived.

As we have moved from city to city, what has become clearer to me are the places that exist in memory. All the places our bodies have known do not exist within the confines of the histories we allow to be written of ourselves. Geography will constantly betray these places. Nostalgia waits its turn, but called upon, cannot offer an accurate enough map of these places. And this is what I mean.

In Ilorin, a place ceased to exist as a geographical fact after the Fulani invasion. In this place there was a form of worship that became taboo; pagan. But all the people I talk to in Ilorin seem to have reached the same conclusions about how to carry the history of this invasion. They preserve their memories in fact compartments.

When you ask them how, they tell you the facts of an invasion. They say the mosque in Ilorin is the largest mosque in Nigeria. They say that religion has wiped everything. The man called Musa says, Even if you are a pagan in Ilorin now, you cannot come out openly and say it. They have terminated paganism. And when he says this, his face is the face of a narrator handing down the facts of history. The stories beneath these facts are legion and untold. And if you are looking to see what it means for geography and history to hold memory, you will find these words instead: My name is Musa and I am from Ilorin. A name and a place for the story of a life.

There are no epitaphs erected on the sediments of history to show where our lost places continue to perpetuate themselves, but in six cities I have almost always found two types of people who continue to remember what each sediment of history means: the custodians of history and the keepers of nostalgia.

A custodian remembers for instance that in Satiru, Sokoto, a war was fought in 1906 between Britain and the people of Satiru: the Satiru Revolt. He shows you a picture on a museum wall and tells you, just before he moves on to the next preserved history, since the bombardment, grass has refused to grow from the earth of this place in Satiru. He shows you 24 framed correspondences written in Arabic by Usman Dan Fodio’s Jihad scholars and then he shows you a piece of the iron gate from the city walls at Kofar Taramniya in Sokoto, a memento of Britain’s invasion.

The keeper of nostalgia is not in a hurry. He has time on his hands. He has been sitting here forever waiting for his hour and he knows that a place never ever resolves itself into its facts. He comes to the state library in Sokoto everyday.

You will find him there, sitting on that chair placed where the stairs that lead up to the archived books begin, reading a newspaper. He has done this almost everyday of his adult life to save himself the cost of buying papers. Times are hard. And, it is the way he sits that gives him away; a man who has found a way to make, within himself, spaces for his questions. And when, finally, you ask him what it is like to live here, he will rearrange his body of questions, close the papers, and begin by telling you, the people here are nice to strangers.