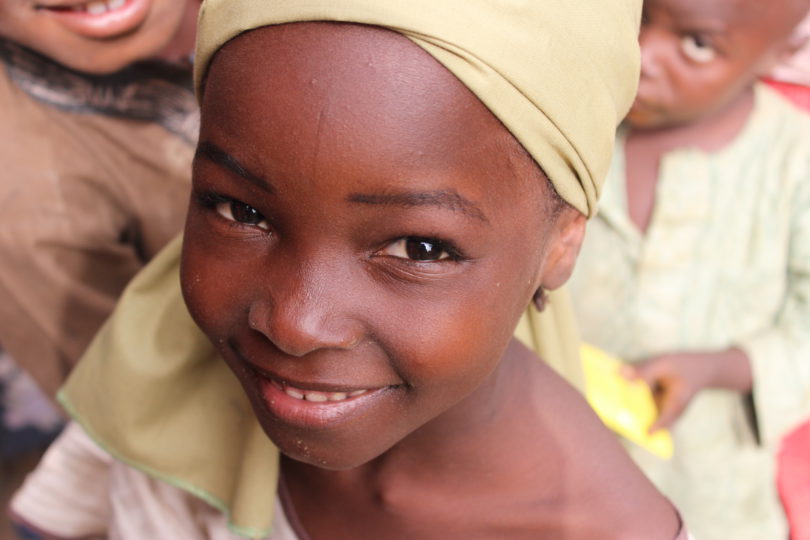 In the ancient city of Zaria a girl stares at me as I take her picture. She is not less than five; her eyes are aglow with a childish sense of innocence, her brow smooth and free from curiosity wrinkles even though she is, in fact, curious. On her hair is a lime chiffon scarf, tightly bound by how they enclose over her ears and temples. The shutter sound startles her, and she turns away after the first click, walking briskly towards the mud door opening leading to a world I was yet to see. She is barefoot, her feet white with dust, the edge of her wrapper softly sweeping the sand, leaving behind her a small cloudy trail of dust. At the opening she pauses and turns back to me. I smile. The childish curiosity fades, and her brow relaxes. She giggles, smiles into her palms, and disappears through the doorway, leaving behind a collage of memories that captures a time I will never see again. Her face stays behind, a tattoo on my subconscious, a look to remind, to remember.

The people of Zaria are like the faces in my dreams. They come slowly but purposefully, their features prominent with intent and resolve, reminding me of myself and times I had thought I had forgotten. Times when I was a little girl myself, not less than five, my eyes aglow with a childish innocence. In my dreams I am standing and watching the faces that framed my girlhood—my mother who sewed the orange satin dress I had won on my birthday, the aunt who made the cake and let me mix the cake batter with my five year old hands. And like the girl with the lime chiffon scarf, there is a progress in my emotions; from a place of wariness and circumspection to willingness, trust, and familiarity. I stretch forth my hands and hold theirs, I touch their faces in these dreams and I am assured of a peace that fills my spirits. Laughter becomes lighter; breathing is feathery, calming, like water flowing through a patched throat.

The sun is ruthless as the traditional head leads me to meet his wife. I have no expectations of what to find or what I am searching for. But just like the girl with the lime chiffon scarf, disappearing through a dark doorway opening up to a world unseen, I want to disappear. I want to disappear into a vortex of these women’s hidden emotions, their unspoken words, spontaneous gestures that talk with a voice of movement. The first woman is a visitor, clothed in a flowing silk blue Hijab. She is Rabi, the mother of a ten year old already aware of an impending marriage. Her eyes are kind, but she answers questions with an assured voice, a visionary that believes a daughter should be raised by the mother and her father. It is a collective responsibility, and in her response I see a light of defiance in her eyes, a belief in her reasoning. The wife, Hajara is different. I relate with her gestures, the level of observation, watching people to accept them. Her eyes stare ahead, sometimes at me, other times at nothing. But when I ask for her daughters, a smile emerges, filling her space, a protective wall of silence. Ten children—four daughters; three married at fourteen and already with children. Their faces appear to me, illusions of these women, their dreams written on their faces as a projection of mine. They come alive when she points to her daughter, a deliberate gesture to separate her from a stepdaughter, who had been standing by her side all these while. In that moment I wonder where the relationship of a mother and daughter begins or if it ever ends. Is blood vital to unity? Can the connection of genes only come from the womb? Or was affection that bond that tied not by the physical but through feelings, emotions that never grow old? From a stranger’s viewpoint, I have no answers. But I think of my mother’s love for me and her niece, Aunt Esther. The answer comes wholesomely, a satisfaction of my predilections. Motherhood though unified by love, could be diverse, just like cultures. We love who we want to love.

The little girl with the lime chiffon scarf disappears into a doorway, her face gone to a memory. But for the faces I have always loved, I pray, even in the absence of life, for them to never disappear.