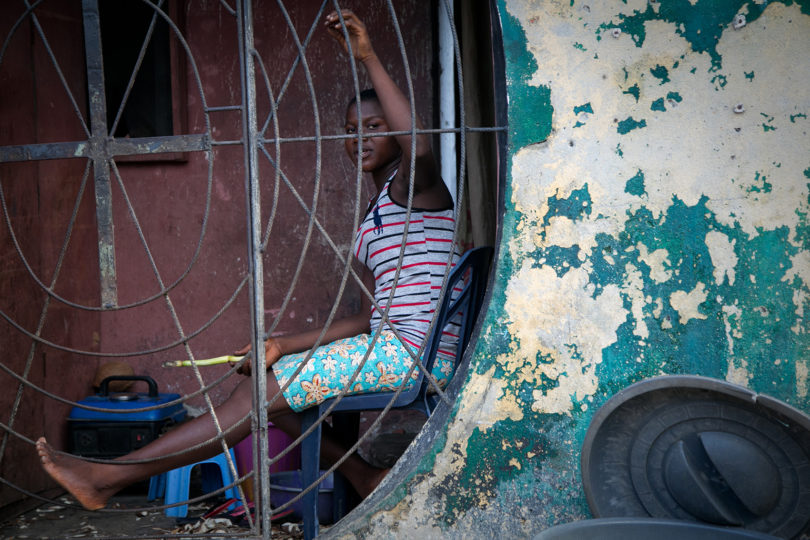 “I like dancing,” she says. “I used to be a good dancer until I was shot in the leg. The bullet passed through my thigh from behind and came out in front. The mark is still there.”

We’re standing in a radio station at the Okrika Waterfront in Port Harcourt when her voice comes on. There is no face to the voice—only an audio representation of her presence in the room. I imagine her: a young woman sitting on her bed in her home, minding her life. A bullet straying into her room, piercing through her thigh, violating her body, coming out from the other side.

Subtle pivots in the landscape for instance, the manner of dismembered leaves around the foot of a tree, a woman at a window thinking of the façade of youth, a restless man honking his horn in the morning traffic, two men shaking hands at a bar on a Friday evening, an indecisive couple at a dinner, the smell of rising dust from a sudden rain—all of these things, immense in their seeming banality, are how a city installs itself. But what constructs a community built only out of insufficiency?

When we get to the Okrika Waterfront, our host, M., stops for a second and says: “Think about this: this point and everywhere beyond it used to be swamp. The ground you’re standing on and everything on it were created, literally, in the material sense by the people you see here. But now the government wants to send them away without a plan.”

Around 9 am on 12 October 2009, armed forces working for the Rivers state government opened fire on unarmed protesters in Bundu Ama. About 2000 protesters—including men, women and children—had taken to the streets to protest the demolition of their homes on the waterfront without a plan to resettle them elsewhere. I saw parts of a video recorded on that day by M.; I heard the first gunshot.

And then a slew of gunshots.

It was on this day that J., a girl who loved to dance, was hit by a stray bullet in her left thigh right there inside her home.

I have been thinking about J. a lot on the road trip. I begin to look everywhere for more on the October shootings in 2009. I find a set of photographs by Amnesty International. When I scroll to the fourteenth photograph, I find her image there like a dent on my computer screen. She is lying on a bed with clean flowery sheets, her hands and legs stretched in abandonment—the ultimate pose of a woman violated.

In the next photograph, a boy places his ahead against a thin wall of metal. His large ovate eyes are looking away from the camera. On the wall is a bullet hole—the third eye in the photograph.

Violence as first or only resort is the demonstration of a malformed soul.

M. and his team worked with the people of Okrika Waterfront to create a radio station. They named it “Chicoco”—after the mud found under the water which the earliest settlers in the community used to build their homes. When the permanent building for the radio station is complete, it will straddle the land and the water. From right there on that dirty water kids shit in and drink from, a new sound will emerge on a frequency impossible to ignore. I imagine someone will lift the mic in that studio to their lips and say: “People live here.”