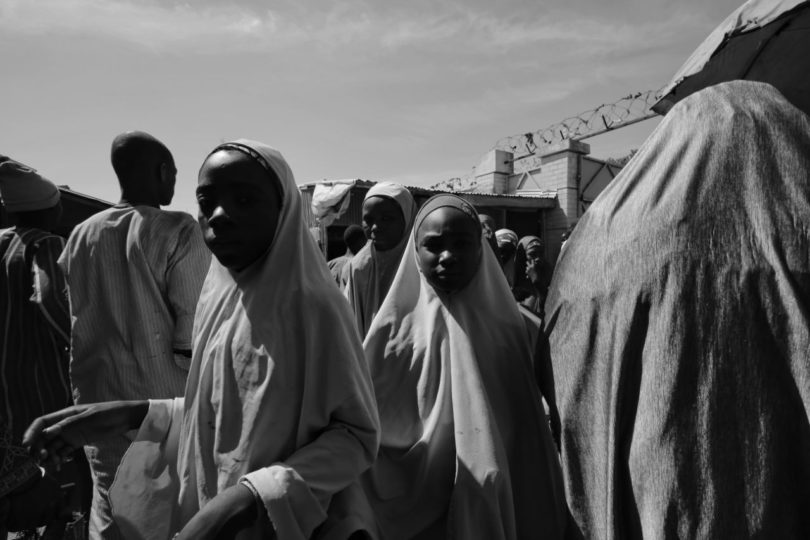 Walking along the roads of Ahmadu Bello University campus in Zaria, we see a poster of a popular Nigerian actress on the wall. What is that like, asks my friend, to see an image of oneself displayed in a public space? I imagine her, the actress, regarding alongside us, her own image on the wall. What has changed, I wonder, in the space between the moment the photograph was made and this point? How does her present self now regard the self in the image?

Sometimes I see myself, as if I was a second person standing in the doorway. She has a lot to say to me but the difficulty to bother with the interiors blurs my view. How much dedication is required for the self to clearly see the self?

In occupying spaces in other people’s lives, how much is too much? When do we talk from the entrance, raising our voices, and at what point do we come in? In the past few weeks, we—my co-travellers and I—have let ourselves into unfamiliar spaces, exposing ourselves to be observed. Who are you people? What do you do? Where are you from? Why do you want to speak to me?

One evening, surrounded by the quiet ambience of Ilorin, I walk up to a woman as she re-arranges the roasted corns before her, head bent in smoke. She looks up at me when I greet her and, upon realizing I want more than corn, immediately turns away. I don’t want to talk to you, she says. Go meet other people. Why do you even want to speak to me? Go.

People remove their gaze from what they do not want to see. But how else can we guard ourselves from the probing eyes of strangers besides acting as though they are not present?

One night in Sokoto, I was on the cusp of sleep when I began to dream. I opened my eyes and had an urge to write it down. My notepad was not on the bed, neither was my phone. I closed my eyes and promised myself to remember in the morning. But we know how this story usually ends—one wakes up and the dream is gone. I went about my day with a deep sense of loss. How do you chase a dream that has eluded you?

In a dream, my body travels across space and time. Sometimes I’m older, sometimes I’m younger, but every time, I’m an observer of myself, sitting in the audience, watching my body play a role I know nothing about. On occasion, I see myself doing extraordinary things, seeing worlds that are beyond here, living another life. Other times, however, it’s the same cycle of talking and walking and sitting and breathing, now in unfamiliar places. So you say in the same manner of the trivia, those dreams, when forgotten, should not be paid any attention. But have you ever considered that so much of a life is lived doing the ordinary?

Perhaps, I often wonder, if I look closely, squint my eyes in utmost concentration, I will be able to see the wind. Maybe one day, if I sit still, look well enough, I will see my own breath. If you ask me, But why does that matter? I’ll tell you I don’t know. Perhaps it’s one of the reasons I’m here, to make an affair of the mundane.

One thought on “Notes on Seeing”