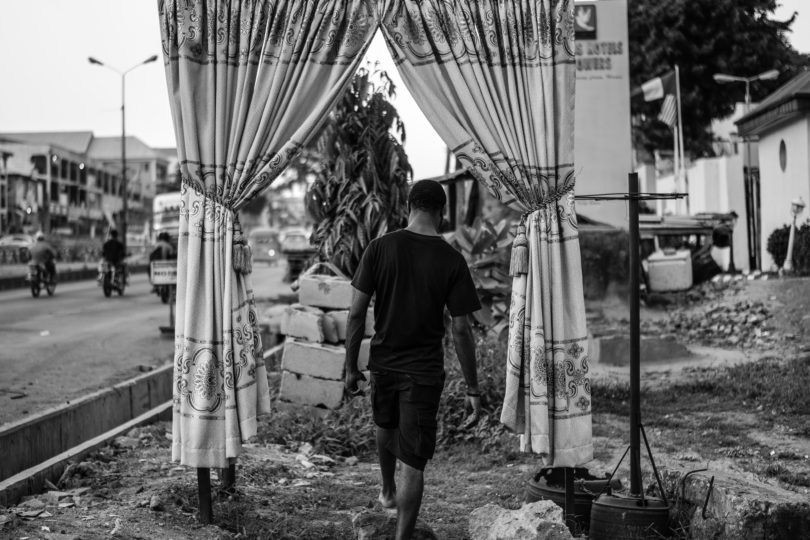 Walking on the Lokoja-Okenne road, I saw men with shovels and hoes, waiting. Only seven in the morning, they dallied beside the road. What moves me to remember them? The growing number of idle men? Or, in their poses and glances, how difficult it was to distinguish them from displayed wares: bread loaves and Coca-Cola, groundnuts and water, biscuits and akara.

A labourer’s morning is lived in anticipation, as the precarious pursuit of hope. Never in my walk did I see a man leave, tired of waiting. All remained stationed. More men alighted from motorcycles with work tools. Most groups—beside stalls and pavements, sitting on the floor, standing and in self-embrace, their faces lined with sweat—comprised of two or three men, four at the most. Nothing of their conversations (likely in Igbira) made sense to me. Only occasionally did they return my glances with silent indifference.

Who will hire them? Who will make them less dispensable, worthy today, worthless tomorrow?

A man who works on the street, if the street is familiar and his job habitual, does not tire from tedium. He is not tired from rising early to present himself for hire. He tires instead from the slow and steady viciousness of staring at the world, idle and underpaid.

Photograph: “The State of Inertia,” by Emeka Okereke