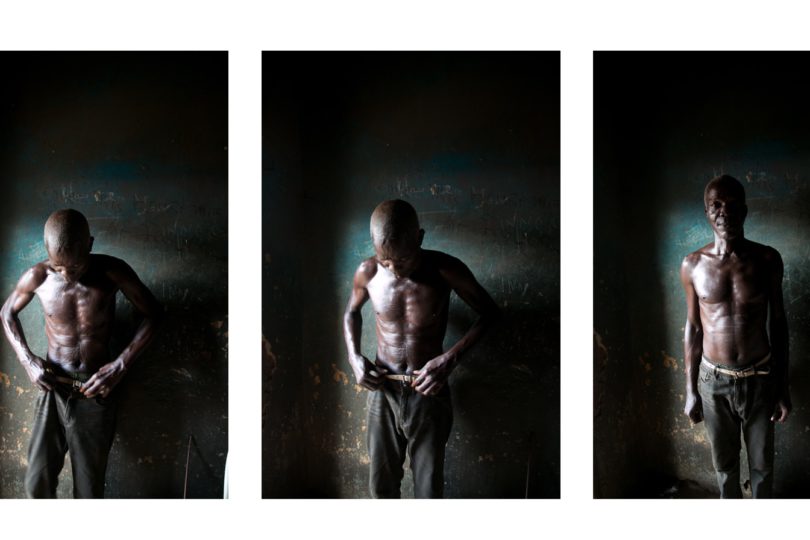 I admit that when I met the Asuen family that lives on the same street that Majek Fashek was born I was most interested in the 58-year-old father.

He listened closely as his 89-year-old mother who lives in the same house with his wife and their daughters shared stories of the area and the origins of the Benin moat.

When he saw me ready myself to take a few pictures of him he instinctively adjusted his belt and straightened out his trousers.

In a photograph, a subject’s pose is usually the final draft of a sum of instances. There are, before the final rendering, a series of moments locked in between the staging and the shooting. And so, whenever I see a photograph, I often wonder: where are the pre-frames?

I think of masculinity now in terms of pre-frames: the preparation before the eventual show-off, the deliberations on how one would like to be perceived, and of course, the actual pose that is rendered.

When I first see the series of photographs Z. has made of Mr. Asuen, I think to myself: oh look—the first and second photographs culminate into the third.

But a photograph is born to always unravel itself.

When I study the final portrait again, I notice the disparity between it and the intentions of the first two frames: It is interesting how Mr. Asuen’s adjustment of his belt and trousers does nothing to change his appearance—he is essentially the same before and after the photograph. His true intention lies there, in the final frame; it becomes obvious that Mr. Asuen does not think of his honor as related to how he is dressed. Instead, his honor is in his gait, in the slight protrusion of his chest, in the way his fists are folded. No clothe can add or take this away from him. This, too, is a valid way to be a man.

When we arrived in Gele Gele, I was struck by the hostility with which our team was met by the leader of the community. It was clear after an uncomfortable meeting in the village court that we were not welcome. No. We absolutely could not photograph or film in their village. Reluctantly, after a few tense minutes, the chief of Gele Gele eventually permitted a tour and for us to speak with some of the villagers.

We were followed around by what felt like a small army of intimidating teenage boys and led to a buka to have some starch and banga soup. Tony stood out immediately as the leader of this group of suspicious young men. He asked me if I was Hausa. I admit I couldn’t help it, so I said: Yes. He said he “knew it”—he had lived in the North before and I “looked like them”. And this 19-year-old was looking for a wife!

His bravado quickly got him into a friendly argument with the guys in our group who teased him about not being man enough.

When it felt like the time was right, I asked him if he would allow me to photograph him. He was taken back. “Me? Like this?” he asked looking down at his worn T-shirt and denim shorts with holes in the knees.  When it became clear that it was a genuine request, he looked around to his friends who appeared to approve then he told me he would be right back. About twenty minutes later, he returned looking like the popular musician Wizkid and everyone complimented him on his ‘swag’.

I have often wondered about the quintessential masculine image. Of course, the existence of such an image is impossible—the socially accepted idea of a quintessential man falls apart because it is a multiplicity of constructs. So I lean on Tony’s premises for going to change into different clothes: First, an attractive woman appears to have taken interest in him—he must up his game if he is to be taken seriously. Secondly, an image of him is about to be made. And this image must transcend all perceived ordinariness around him; this image must be iconic—it must represent who he can be if he has no restrictions. So I stand beside Z., waiting for Tony’s quintessential man to emerge.

There is the man and there is the ego of the man. Between the two is an embrace that is always coalescing. When Tony returns in his ‘swag clothes’ for Z.’s photograph, I understand the full import of his question: Me? Like this?

Sometimes, we make images of ourselves simply to depart from our own bodies. I speak here of the image as an entity beyond what is framed. The question of how we want to be photographed is usually the contention before the final pose. Perhaps, this tension exists because an image is always perceived in dual dimensions: one as a presence and the other as a message.

From Tony’s final frame I learn how, through an image, a man can depart from his own body into that of someone he wishes to become. He leaves from being the Tony of Gele Gele and enters into being the Wizkid of Gele Gele. Perhaps, this is Tony’s quintessential man—if he could look like this, then would he be perceived to be a ‘star’? If he could become like Wizkid in presence and in message, would he have higher chances with Z.?

I had heard a lot about Mr Jeroh the biology teacher at Federal Government College Warri before I actually met him.

He described his role at the school as “vast” and one of the students I spoke to had described him as “our action daddy” whose rule was simple: You obey before complaining.

When he kindly invited me to his home at the school staff quarters to speak with him, I was impressed by this very proud man who believes that the students “need real discipline in this world,” and says that he models not only his home life but his interactions with the students on the iconic character Captain von Trap from The Sound of Music.

As we said our goodbyes, it felt like the right time to photograph him. Right there in front of his house, he pulled on a clean T-shirt and adjusted himself while I took a few pictures.

Permit me to insert myself, like an extra frame, into this series of images:

I was a frail child while growing up. I must have survived only because one day, after I had been sick for a long time and no drug seemed to be working, my mother looked me in the eye and said: If you die I will kill you.

I have faint memories of sitting with my mother in the kitchen and listening to her say: Behave like a man. Be firm like your father. But I didn’t want to be firm in the way my father was. I wanted to be firm in the way that she was. I wanted to be able to look in the eyes of someone I love and have the strength to say: If you die I will kill you.

Permit me, but there are other ways to be a man.

*This work was a collaboration between Zaynab Odunsi and Yinka Elujoba.

2 thoughts on “In True Form”

Leave a Reply to Woman of the Future Cancel reply