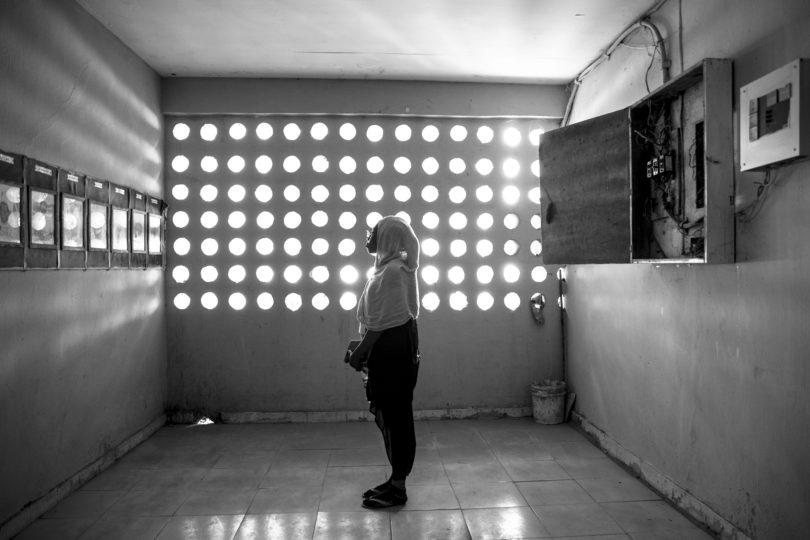 Sometimes, I think of my life as a memory I want to forget. I see it as the scenery that speeds past the windows of the bus as we move from city to city, in motion, though my body does not move. My memories become distinct then, like flashing through a kaleidoscope, and I think of times I want to forget. I think of 1994, the first time I became aware of death. The stillness of my Grandmother’s body as she lay in the coffin, clothed in white. The living room of the family house swathed with lace, designed not with the intention of happiness, but of mourning. I think of her eyes beneath the closed eyelids, her brown brown eyes. Her eyes that smiled whenever we came home for Christmas and she hugged me; her skin soft, her scent the mixture of musk, almost wooden, camphor, vinegar and roasted palm kernel oil. I think of my cousin weeping, calling our Grandmother’s name to the dark skies of that October night. Matilda, Matilda. I think of that same cousin dying two years later, her breath ceasing in the delivery room as the doctor pulled her baby by its hand out of her womb. I think of the baby in 2009, grown to a teenager. The hand used to draw him out is withered. He was crushed by a trailer on the asphalt roads of my village, right in front of the dirt track that detours to my Grandfather’s home. I think of all these deaths, and wonder if memories are necessary. I wonder why life is not like the magic board my mother bought in Singapore for a six-year old me, a board that made writing disappear, memories lost, moments forgotten.

Sometimes I wish I could wipe memory away.

These cities remind me of my memories. Ibadan, air fresh from the rain reminds me of breezy mornings in Owerri, the sunlight glowing on the morning glories growing in a vase on the kitchen window. The glaring sun in Minna brings back the sun in Gwagwalada – of dehydration, throats patched with consistent thirst, heatstroke. The blue skies of Sokoto, with its quiet neighborhoods and curvy large roads remind me of sparsely planted willows and sunflower spotted hills in Mountain View, Santa Clarita. The old railroad of Ilorin brought back days of walking to school on rail tracks. Dorothy Aken’Over of Illorin reminds me of my Aunt Esther, similar in laughter, gap-teeth and the undeniable strength that came with being a single mother. I also remember that my Aunt Esther is dead, leaving this world suddenly in a dark night of August 2016. Dr Aisha of Sokoto reminds me of my mother: accommodating, excited, a strong and resilient voice. These thoughts make me silent, they freeze my voice. They flood me of memories of things I wish for in delirium, (a thought? a feeling, smell?) but I am not sure I really want.

Sometimes I wish I did not remember.

But then, like moving wind, like the trees that float in a smudge of brown and green through the tinted window of the backseat of our bus, I remember the good memories. Memories of trips to amusement parks; of s’mores, milkshakes and cotton candy. Of cakes shaped like the star, shiny with frosting. Of brick homes and rose bushes, of owning unconventional pets like chickens named Butter and Night, gifted to me and my brother by my Grandmother in 1993. Of English spaniels Snoopy and Harley, who ran faster than lighting when taken off their leashes, eating pieces of meat taken by my brother from pots of stew when Aunt Esther wasn’t looking. I remember walking rail tracks to school, counting steps as I skipped in my Oxfords, my braids jangling with multi-colored beads. I think of my mother, alive, her laughter like warm blankets on icy nights. I think of memories like these, fresh, like newly tapped palmwine, stronger than alcohol. And I realize that my memories are me…they make me alive. My life is my body being present in my past, living in my future. And even though the bad may feel suffocating, the good siphons it, makes it a bearable thing.

And my body, still but in motion, breathing calmly amidst chaos, this body becomes somewhat easier to carry through this journey.