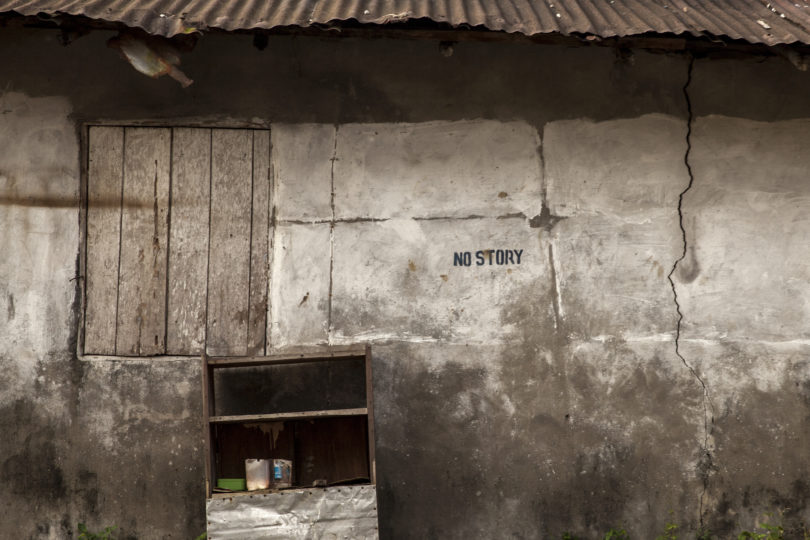 “You don’t take a photograph. You ask quietly to borrow it.”
— Unknown

There is a thing about missed opportunities. Most times, once it’s gone, it’s gone. The only thing you can do is hope. It’s worse with missed pictures. Some missed shots are just that, missed shots, a grain of sand tossed in an ocean.

We are at the gate again. This time, the security guard lets us in. We are no longer strangers, we exchange warm greetings and he smiles. He ask if we have called, we haven’t. He asked if we have Mr. Jide’s phone number, we don’t. His temper starts rising, just as it did the previous evening. He queries us for not having Mr. Jide’s number. We apologize.

I plead with him to inform Mr. Jide that we are waiting at the gate, he says he has already done that, I didn’t see him when he did.

He stands up, opens the gate for a car to drive out. He walks outside for a bit, then comes back in. He stands few meters from us and starts ranting in Yoruba, his finger points at us, head shakes in disdain. I could tell what he was saying even though I don’t understand Yoruba.

He continues ranting, walking in circles, checking the flowers close to the fence, trying to be busy until an older man comes and they start talking. He looks at us as they talk, head still shaking in disdain.

“How can the four of you forget to collect his number? If not that my Oga is here, I would have sent you out. How could you…” Kemi interprets what he had said earlier.

“I don’t understand why he is so angry at us for not collecting a phone number,” Kemi says.

We continue waiting. The previous day, Sunny and Austin were with us, today we are alone, waiting. I see shadows of Sokoto. Two days spent waiting for permission to access an Islamic School but the permission was given when the road decided our time in Sokoto was over. We have only two days in Akure, and I already know permission won’t be granted on time. This will be part of the pictures I could not make.

“Hey Jamie, did you see that?” Amara points at the Sun rising in the distance.

I follow her gaze and just stare. My camera is beyond reach so my eyes feed on the site instead.

This like many others will be part of the pictures I could not make.

“In Sokoto we welcome everyone who comes to the Palace, but I don’t know you guys and what your mission really is. Even if you take a picture of me without my consent, you won’t see me in it when you check it later.”

This was an opportunity dashed in pieces. Sokoto; the seat of the Northern Caliphate, the Sultan’s Palace, the Culture and History Bureau, The Nigeria/Niger Border town Illela. These are pictures I could not make.

“Pictures are not allowed here. But if you want to take pictures with your camera, you have to pay five thousand naira, you will pay more if you go to our office.” He said to me as I hurried to catch up with the team. He continued tailing me. Ensuring I did not take any pictures.

“Photographs are not allowed inside the Museum because of the ongoing exhibition. There was a sign inside that reads, do not take pictures. I obeyed and even dropped my camera and phone in our van so I won’t be tempted. Where is your sign?”

I continued walking, he followed.

“Pictures are not allowed here. This is the Museum of Traditional Architecture.”

I saw a girl take a selfie with her friend, he pretends not to see her.

At Mapo Hall, I took a walk around the premises, enjoying the view and mapping out spots for interventions. The lines, pillars, repetitions and awesome panoramic view. In my head, I took photographs of what lies behind its walls. My camera twitched, ready to shoot. My co-travelers eager as I was, but we smelled like tourist sweating pounds and dollars.

As we drove off, I scribbled on my journal, “by not permitting us to make photographs, the work has already been done here.”

All the pictures I could not make are like the faces I could not speak to, the lives that did not enter mine. The places we zoomed past.

All the pictures I could not make are easy, I look hard but quick enough to get them in my head.

All the pictures I could not make are not lost, they are moments twirling in an endless stream of time.

All the pictures I could not make I actually made, I don’t just know I did. For as long as the eyes have it, the body has been inserted in a space, the pictures have been made already.