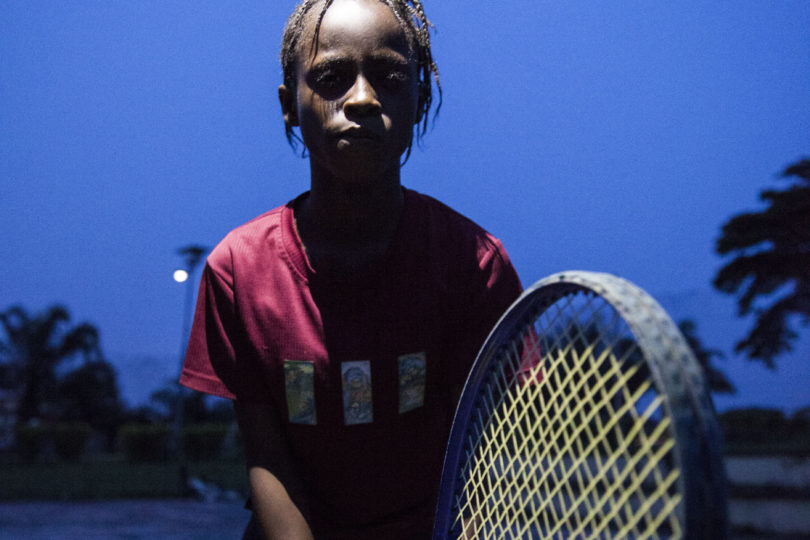 Coach Adepeju Faboyinde and Students
I.
In a country where the motivation for a side-hustle is money, Mrs Adepeju formally referred to as coach is something of a rarity.
Tennis is not yet popular enough in Nigeria for anyone to pay top money for professional coaching. In the ten years since she started coaching, not a lot had changed. Still she did not deter, she yelled out instructions to her frail young students, directing the game to the best of her ability.  This was a common sight on Tuesdays, wednesdays and Friday’s at the Liberty stadium in Ibadan.
Her passion for Tennis started in 86′ as a love for the outfit the professional players wore, now, 20 years later she found her self coaching a young team- mostly made of girls – in tennis.
The girls do their best to follow her instructions, but their handling of the rackets although a bit sturdy still gave them off as newbies.

Ìmọ́lẹ̀
II.
Ìmọ́lẹ̀ is the exception though, she handles the racket in a way that seems like she has centuries of experience in her hands.
I watch her play the game with so much enthusiasm and can tell that on that court nothing else mattered, what ever little troubles she may have doesn’t matter, as she played the game intensely and without care of those of us watching her.
When the chance came up, I struck up a conversation.
“How long have you been playing for?”
“It’s 3 years now since I started playing” Ìmọ́lẹ̀ and Team mates (L-R Praise and Adura)
3 years experience had won her the trust of her team mates- team mates whom I would later find out were her younger sisters- they let her call the shots and direct the mood of the game. This, she did proudly.
III.
Among the Yoruba people of South Western Nigeria, names carry special significance.
They’re more than parts of an identity; they’re most times an evidence of the hopes and expectations most parents have for their children.
There’s an old belief and a proverb that a good name paves way for a child. For “Ìmọ́lẹ̀” whose name actually translates to “light”, tennis and the court was an introduction to a new light.
All Images in this post are photographed by Nengi Nelson at the Obafemi Awolowo/ Liberty Stadium Ibadan.

One thought on “A Little Light”