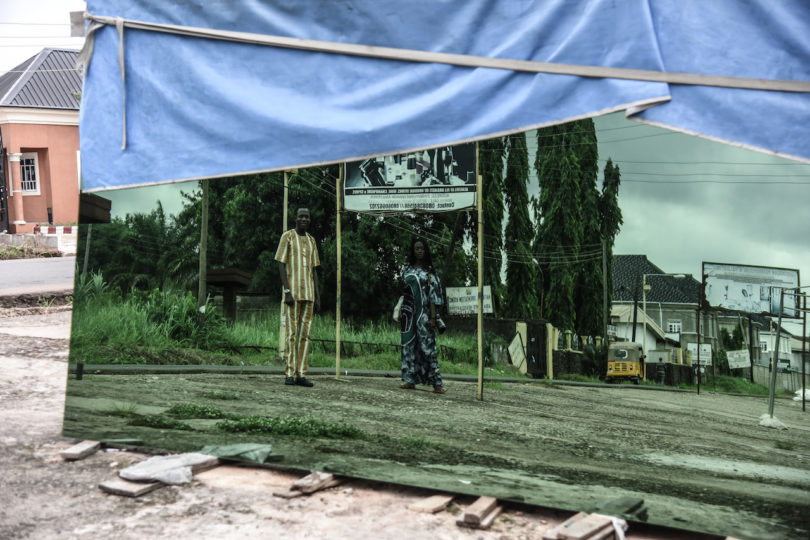 I have always imagined the most potent way of reducing immapancy to be putting feet on the ground, and breathing the air of a place. So I began to walk in Umuahia. Early on a Sunday morning, I left the hotel and walked down the street. I waved at the men and women going to church. Some waved back. Others watched me, amused. Further down the street there was a woman at a window: all I saw were the length of her lashes, and a smile on her lips. I fell in love with her instantly, fully, completely, with the intensity of a lifetime even, but only in the wholeness of that moment—I was a circle and she was my disappearing radius.

I turned into Macaulay street and kept on walking, then I found myself on Azikwe road. I went on till I got to the junction just at the entrance of Ojike. There, at the junction, was an open space with an almond tree. Under the tree was an empty bench and plenty of breeze. I had been walking for long and it appeared like a good place to rest. So I sat on it and began to write in my journal. Two sisters walked up to me and began asking if I was new around here. “No,” I lied. Then I protested that they had chosen to talk with me in English rather than Igbo. They laughed and spoke to each other in Igbo. Then one of them turned to me and said: “You are not acting like you are from this area. You’re not even acting like you are from this bench.”

When they left I adjusted myself several times on the bench, thinking of what pose would fit me into Umuahia. I had assumed that the way I sat unconcerned would make anyone ignore me as though I were a usual object in the landscape. I studied the people walking by: their mannerisms, their laughter, the angles of their feet. Is there an owner’s pose?

I took a walk in Calabar the morning after our hotel was robbed. I walked down the Murtala Mohammed Highway till I got to the Police Zone 6 Quarters. A policeman was helping school children cross. I stopped to watch him: his orange shirt tucked out, raising his hands, shouting at cars who didn’t stop on time, moving back and forth till every child was safe on the other side. I stopped and praised him for his work. I thanked him and thanked him and then he began to cry.

I turned left into Esuk Utan. Just after the filling station on the other side there was a restaurant out there in the open. A set of benches with men eating. I joined them. I ordered a plate of yam and beans. I wasn’t interested in eating. I had ordered simply to have a legal reason to be there. I began to make small talk with a man next to me.

“Why are you in Calabar?” he asked.

“If I was writing in my house, I wouldn’t have met you, for instance.”

He paused and took a mouthful of his food. Then he said: “so you will write about me now?”

“Yes. I will also write about how Calabar is a dangerous place to live in. There are robbers and cult-clashes everywhere you turn here.”

He dropped his spoon instantly and shook his head. And then he shook his head again. “No. Never. You cannot write it like that. I have lived here for over 17 years. This place is a paradise. The robbers and cult members you are talking about are just springing up. We will defeat them. You know the serpent was present with Adam and Eve even in Eden. Every paradise has its serpent.”

I took a walk in Yola just a few blocks down Philip Meken street. A man walked up to me and began speaking rapidly in Hausa. The only word I could make out was ‘turari’. I’d known the word to be a reference to ‘incense’, so I figured something about my perfume had amused him.

He continued speaking in Hausa. Then he paused and watched me with suspicion in his eyes.

“No, I’m not Hausa. I don’t even understand anything you’ve said,” I replied. Then I asked him too: “Ba Yoruba?”

He shook his head. So he began speaking Hausa and I began speaking Yoruba. And then we laughed and laughed because language is not a barrier if you have good intentions.

I took a walk in Maiduguri because I was afraid. But nothing happened.

I took a walk in Lokoja. I walked down Ajaokuta road, past the Baptist Group of Schools, to Ganaja junction and the bridge after it. I walked into streets. Avenues. Closes. Bumped into people. Found myself in people’s compounds without permission. People speaking English, Hausa, Igbo. Plenty of Yoruba. Children sweeping outside their homes, their mothers barking orders from inside. A slight wind on the streets, lifting polythene bags. A woman with a loud megaphone talking about hell. A man, his penis in full glare of the rising sun, pissing on the road.

I was grateful for these familiar appearances but after a while they began to bore me. There was no apprehension of any sort, no fear, no uncertainty. But I kept on walking. I walked for long. I walked aimlessly, recklessly even. I knew it would be my last walk—Oshogbo and Abeokuta were our last two stops. I knew these places very well, their cartography finely carved underneath my feet. And so in Lokoja I continued to walk and walk and I didn’t stop walking.