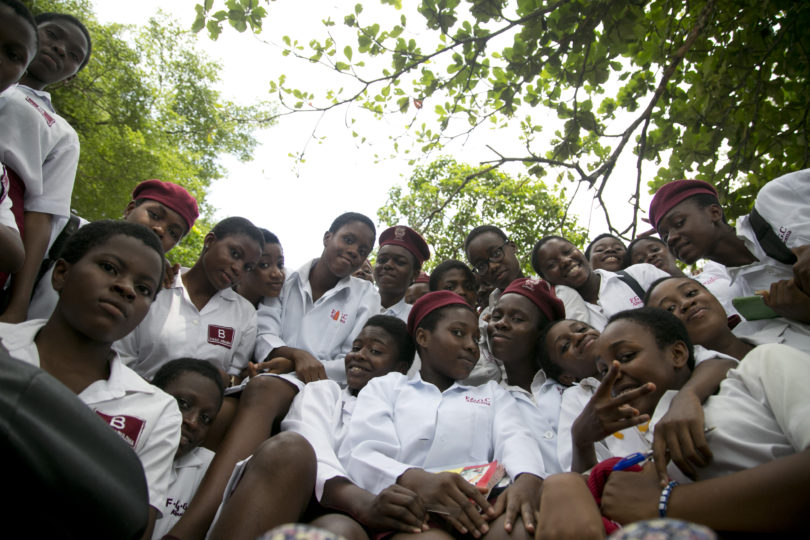 Their responses made me laugh so hard. They reminded me of my friends at school; listening as they spoke in loud voices over one another. Surrounded by these young women in their maroon coloured skirts and white shirts I saw myself and the lifelong friends I laughed with all those years ago at the exact same spot.

Every one of them was an Efosa, Ibukun, Omawunmi; a Kaine, Nengi and a Yemisi.

A return to my alma mater FGGC Abuloma was always going to be an experience fraught with mixed emotions – the last time I set foot on its premises was over 20 years ago. I hadn’t missed it in all those years.

As I travel around the country with Invisible Borders, I have been carrying out interviews with men of different ages and from different ethnic and religious backgrounds. From barristers in Enugu to youth corpers in Umuahia I have been putting questions about my research topic “Stereotypes of masculinity” to these different groups of men as I photograph them.

I knew early in the trip what I wanted to do when we arrived in Port Harcourt – I wanted to pose the same questions to the students at the notoriously feisty Federal Government Girls’ College, Abuloma.

When I arrived with my fellow IB participants, I could tell instantly that the SS3 students who we were introduced to felt uneasy about us; we were after all strangers. This quickly changed when I introduced myself as a photographer and an alumnus and said I wanted to talk to them about boys! About 20 excited girls, who had such strong views about what it means to be a man, quickly pulled me away to sit under a tree to tell me more.

After their initial responses of a list of important physical attributes, they moved on to the personality traits that make a man

Noooo ohh not too tall.

He must know what I want before I even ask.

My husband should be the type that even if I shout he should be quiet.

If I travel now, like you aunty, my husband should be able to look after the children alone.

Women have more needs, like fixing our hair, buying clothes, so yes it’s okay if I am earning more than my husband.

For me ohh, I want him to just be disturbing me with calls – non stop – so when I see my phone I will see like 50 missed calls.

And on it went.

Later, as they volunteered to show me to my old dorm, Bluebell House, Room 5, I thought about who I became after I left Abuloma all those years ago. I wondered if at any point I ever shared some of the views on masculinity that they have now. Did I ever think that a man owns me once he has paid my bride price? Did I ever think that it was okay for your husband to slap or hit like some did? Was there ever a point when I thought that a man that was physically incapable of bearing his own children was not a man?