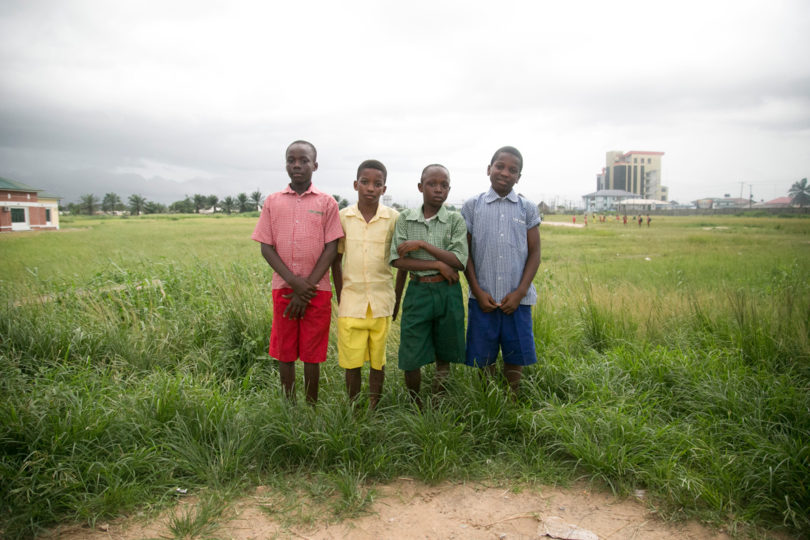 During this year’s Invisible Borders road trip, I will be attempting to answer questions around my topic of research: “Stereotypes of masculinity in postcolonial West Africa : Nigeria in focus”.

Attention will be focused on the stereotypes of masculinity in the different regions across socio economic, ethnic and religious divides, how stereotypes are formed and what prevalent influences of colonialism remain in its aftermath over 50 years  later.

It is impossible to weigh in on the topic without getting the views of teenage boys and young men, with respect to various rites of passage into manhood.

So it was serendipitous upon our arrival in Warri 3 days ago that I found myself at the renowned Federal Government College Warri. Thanks to an article in the Guardian newspaper the day before about a popular Itsekiri historian donating books to the college we headed there as a group to get more information about the donation and Pa. J.O.S Ayomike.

While the writers in our party went straight to the Principal’s office I could not help noticing the relationships between the students – one that everyone who ever went to secondary school in Nigeria would be familiar with. The nostalgia was overwhelming – boys and girls in house colours, walking hand in hand, teasing, running around on a football pitch always ready with a smile and a “good afternoon ma, good afternoon sir”.

As luck would have it on our visit to see the library, we were introduced to Mr. E. Jeroh, biology teacher and proclaimed “Head of discipline”. After a brief discussion with the well spoken teacher who also lives on the premises in the staff quarters I was introduced to the school’s “Power 4”.

Oke Upere; Head boy, Ibiyemi Segun; Deputy Head boy, Ovie Joel; Library prefect and Uzo Obinna; Assembly prefect are all SS2 students who were nominated by their peers and eventually vetted by their teachers for their positions.

Sitting opposite these young men in the sprawling school dining hall for 2 hours was undoubtedly the highlight of Warri for me. I listened in complete awe as they told me stories of life in the dorms with their fellow students, the privilege of the power afforded them and the drawbacks. Oke as headboy gets to wear any house colour daywear, eats the best food, never has to do his own laundry and can be in staff quarters (but only with good reason). The drawbacks are that they have no time to themselves, wake up earlier than everyone else to supervise “rising bell”, and worst of all academic work sometimes takes a back seat.

Asked about what advantages they believe they have over their female classmates – they unanimously agreed “freedom”- the girls’ hostels are always locked but not the boys’. I was stunned to learn that Nigerian education law enforces that when a female student falls pregnant while at school she must be expelled from the institution so as to remove her negative influence on her fellow students. The father however is permitted to remain in full time education.

They are acutely aware of “traditional” male and female roles and accept that the advantages of the separation of the sexes during night time prep for example far outweigh the disadvantages.

They all agreed that a man must provide for his family and make important family decisions as culture dictates. Oke’s sentiment that “a man who cannot provide for his family is not a man” was met with shy laughter and nods.
I spent a few minutes photographing the boys and they respectfully bade me farewell before introducing me to some JS2 boys who I spoke to about their experiences as juniors. They are yet to complete their rites of passage to adulthood and still carry the bags of the senior boys, take their food to them and do their laundry. Their favourite place to hang out in the school is on the fields where the senior boys rarely go. They find the discipline helps them to prepare for adulthood which I cannot disagree with. Some of the most respectful, ambitious, influential men in the country went to Federal Government Colleges (as did some of the vilest, most corrupt!).

As we drive now from Warri to Asaba, and reviewing my images from the last 10 days, I suspect my work will not question so much why these stereotypes of masculinity prevail but what nuances will become apparent as we head from the Midwest to the south and eventually Northern Nigeria.

4 thoughts on “Stereotypes of masculinity in postcolonial Nigeria”